It’s amazing how versatile shrimp is, you can really use it in any dish. This slow cooker aka crockpot chowder was so good even in the summer time. As we were making this, I was thinking to myself, why are we making soup in the summer? The answer to that question I’ll never really know but one thing I do know was how good the chowder was. I’m not a clam chowder fan but this meal will be a staple in our recipes for a long time. To say it was easy to make, like most crockpot dishes, would be misleading. Making the corn mixture was time consuming but it was totally worth it in the end. If you want to know how we made this dish check out the instruction video here! This dish makes 10 servings so it’s a great dish to make on the weekend and have during the week or freeze it and save it for later. If you were going to save it for later I would recommend just freezing the chowder part and then cook fresh shrimp when you that it out.

We found this recipe in Cooking Light and as

usual modified things for what we had on hand and what we like. I never eat the serving size that is recommended so I doubled everything, that is if I were counting calories. So the overall calories were 384 k/cal which fits perfect for me. The carbohydrates came in at 38g, protein was 24g and fat was almost 17g. That’s fairly unbalanced for us but we know where the extra carbs came in. All that corn.

This meal hit the spot. Yes, it’s summer time but for some reason, we were craving soup/chowder and this seemed to be the perfect fit. The corn this summer has been great so might as well use it as a base. The chowder played well with the shrimp. It’s one of those dishes where you want a bite of shrimp and chowder for every bite. Are they good by themselves? Of course, but each bite is so much better when you have a little bit of everything.

What would we do differently?

Let’s let the cat out of the bag. 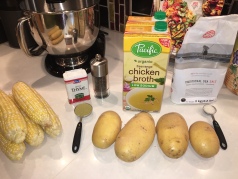 This was totally a soup and not a chowder. In the video, we call it a chowder because that’s what it says in the magazine. When I asked what wifey thought of the dish she said it was great but wanted it to be more chunky. I know I followed the recipe to a T and that’s when I saw that really this is a soup, not a chowder. My recommendation is to only blend 2/3 of the corn mixture. Then that way this recipe is actually a chowder.

We found this dish in Cooking Light magazine. This was a great dish to make over the weekend and then eat throughout the week. The chowder was more of soup but it was still awesome. It played perfectly with the sautéed shrimp and corn. This meal will be a staple for us for a long time. Enjoy!

1. Cut kernels from corn
2. Using the dull side of the knife scrape corn cobs juice into crockpot
3. Add corn cobs and 3 cups Colonels into crockpot
4. Stir in chicken stock, Thyme, 1 teaspoon of salt and potatoes
5. Cook on low for 7 hours and 30 minutes
6. Discard cobs. Stir and half-and-half and 2 tablespoons butter. Stir and add to blender in small portions.
7. Make sure you pull off the center cover of the blender top to allow steam to escape. Cover opening with a paper towel.
8. Blend remaining corn mixture***.
9. Pepper to taste.
10. Heat remaining butter in a sauté pan. Once hot, add shrimp and remaining corn kernels.
11. Cook four minutes or until the shrimp is pink. Then add cooked shrimp to the corn chowder.
*** next time we would only blend two-thirds of the corn mixture to make the chowder more chunky.